How to Exclude Offending Files or Inline Codes

When you combine files with the Combine CSS and javascript files feature, sometimes it is necessary to exclude a file or script to resolve a conflict. The settings on the Exclude Options tab are provided for this scenario. You must however, first determine which file(s) to exclude so first read the section, Resolving Conflicts by Excluding Offending Files. Not because you are experiencing trouble with a particular application means you need to exclude the files from that application. When the files are combined together, any file with errors can affect the rest of combined files.

There are two main sections on this tab;

The second section ignores the original execution order of files on the page and the excluded file will remain in its original position but the other files will be placed in one file and be placed as described above.

Inline codes in declaration blocks such as <style/> and <script/> are excluded in the same manner.

When you click inside the textbox of an exclude setting, it will normally show a drop-down list of items for you to select which one to exclude. These items are substrings of urls of files, or codes that appear in the inline <script/> or <style/> declaration blocks. 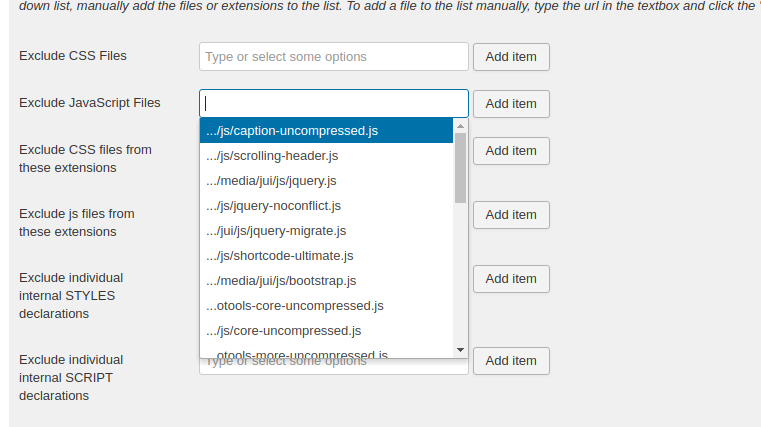 If you don't see any items in the drop-down list or do not see the item you wish to exclude, you can easily add it by typing in the item in the textbox then clicking the Add item button on the right. The drop-down list is not populated on some servers,based on how it's configured but this is a minor issue since you can still exclude any file you want by adding them to the drop-down list manually.

Using the following code as example, this article will demonstrate how to use the exclude settings.

Here we have a javascript file and a declaration block of inline script. This particular one is for adding Google Analytics to your site. Google Analytics must always be excluded to work well so this example may prove useful for most people.